The development of a logo (my logo!)

Setting up a business entails so many things and often it’s hard to know where to start.  I knew early on that a name and logo/brand were going to be important to me.

I sought help with developing my business name (a skills swap with a connection I’d made on Linked In) and I knew that I needed some external thinking when it came to my logo.  I’m creative and have a creative arm to my business, but when it comes to my own logo I wanted to see what developed from someone who wasn’t so close to it all.  Plus I had one image stuck in my head that was blocking any creativity and I certainly didn’t want my logo to be that thinking bubble that wouldn’t go away from my view!!

Step One – Picking my collaborator

As any good business person does, I went seeking recommendations and quotes from brand designers. The one I chose turned out to be someone I had met in person, but that wasn’t the only reason I picked them; the proposal was written in a really personal way, she said she’d work with me to get the right logo for me and I also liked the idea of working with someone local (despite the fact that we never actually met up!).  It just felt right and I think that’s important.

The journey started off with a conversation about me and my business and what I wanted my brand to portray.  It was important to me that my personality came through, that it wasn’t stuffy or too corporate and that it was open enough for my business to grow without limits in terms of what I offer in future.  That’s one of the hardest things early on I think – being able to define your business whilst you are still developing it.

As a response to our conversation I received moodboards pulling together images and words that my designer felt summed up our conversation.  She asked for my thoughts and input on anything that had been missed or things I thought didn’t fit.  It felt collaborative right from the start.

After moodboards and further conversations, the first draft of logos were delivered.  This was the hardest stage for me – the excitement had been built up and I think I was expecting to see the final logo straight away – how naïve I was!  Whilst some of the logos had exactly the elements I’d described to the designer in terms of what I liked in other logos, there was something missing.  There was a wildcard entry too – it seemed completely out of place at first, but the description that went with it in terms of what the thinking behind it was made sense.  After absorbing the designs and feeling guilty that I didn’t like them, ideas of my own started forming.  The wildcard idea wasn’t so wild afterall!!  I took the elements and turned them into something new, something that a professional might be able to turn into something awesome. 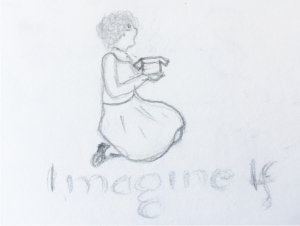 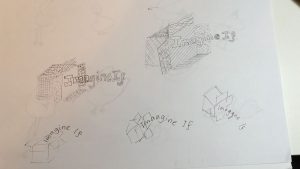 Good job I had a professional on my side huh?  She took my ideas, thoughts and ramblings and developed a series of logos around them.  Things progressed; we tweaked shapes, layouts, text until the basis of my current logo was born.

Throughout the process I 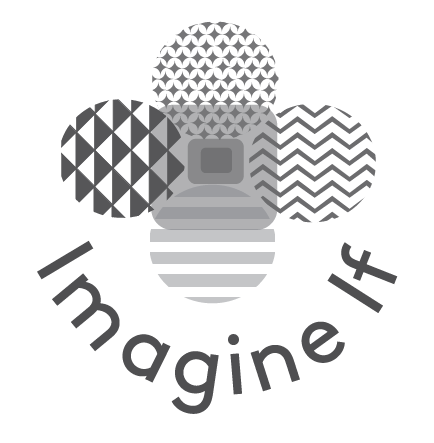 was involving others in the

review too – I knew I was close to this, possibly too close at times and it was important to know what stood out to others too.  It’s funny what people see in a logo – a plaster (that one was struck off as a result), a pattern from a well known shopping bag (bye bye to that design)…. It was helpful to have these thoughts and people like to be involved (I hope!).

This was it, I had my base logo; a box with bubbles coming out and the name of my business.  I thought we were nearly there – how wrong could I have been?!  Little did I know there were patterns, colours, orders and text still to be considered.

I loved the idea of patterns in my logo, it fitted with my personality, my creativity, my fun side.  But picking the right patterns was important – they needed to fit together well, be something I could use in branding as well as the logo and they needed to not look like (thanks for the input folks) footballs or fishes….!  So, the final 5 patterns were chosen.  Nearly there right? Nope!

Next stop; colours.  Picking the right colours was harder than I’d expected.  Some worked, others didn’t.  We experimented with different combinations until we settled on “the one”! 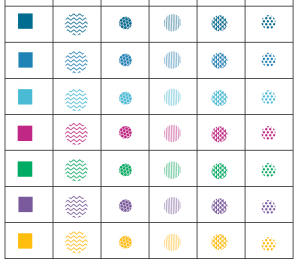 .  This is where my logical side came out to play – I got every pattern in every colour and eliminated the ones that didn’t work until I had my final colour patterns.  It felt like a logic puzzle to work out which order to put the coloured patterns in too – whilst the colours worked together as a group, they just didn’t look right in certain orders.  If you’d asked me at the beginning if I would put orange and pink next to each other I’d have said “hell no!”, but it worked.  I know not everyone gets this involved with a logo, but I wanted to make sure I’d tested out every option and rather than ask someone else to do this I wanted the control of knowing I’d seen every possibility!   I figured I should use my designers time for the things I couldn’t do myself.

At some point we also looked at text for the name in the logo.  This was probably one of the easiest choices throughout the process.  I’m not sure why, but I think it could have been the least important element for me – it just needed to look right.

We continued to tweak the design; the patterns were changed a bit, the levels of the bubbles were adjusted and we were there….. or were we?!

The final check with a group of friends led one to suggest the box wasn’t needed. Pah! Of course it was – that’s part of the logo story, thoughts coming out of the box.  But for completeness we did a version without the box and you know what – turns out my friend was right!  Taking the box away didn’t lose anything, in fact it felt freer, cleaner.  What a good job I wasn’t so set as to ignore this suggestion!

So it turned from this…

The final step after removing the box was to readjust the bubbles.  And once that was done – the logo was finally done, ready to be released to the world.

It felt like a long journey to get here, but I absolutely love the final result.

There were many things that challenged me throughout the process; mainly focussed on my own feelings and preferences for working.  Things I learnt along the way include;

I know my designer reflected on the process from her side of things too.  In fact we both (independently) decided to write blogs on the subject….. Interested to know the other side of the story?  It’ll be available soon, but for now, check out Design Colleague’s website.