Why team building isn’t a one off activity 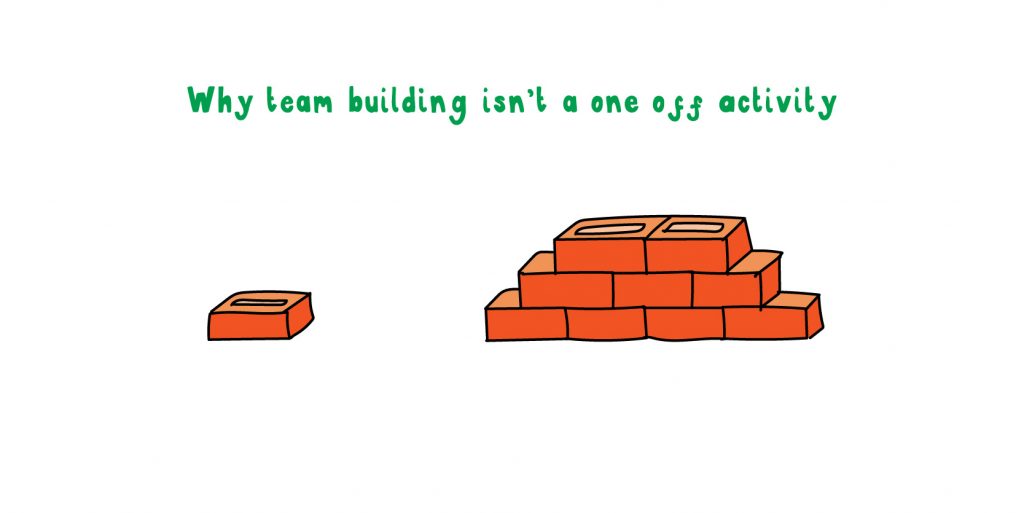 Why team building isn’t a one off activity

So often I see people go on a team building day, have a wonderful time whilst they are there and then only ever refer to it as a fun day out.

To me, this isn’t enough. To me, building a team doesn’t just take a day, it takes continued effort. And that’s why I tend to call it team development – it’s something that happens over a period of time, not just all in one hit.

Think of a house…  I might build my own house, I might buy one that’s recently been built by someone else, I may inherit a run down wreck that’s falling apart at the seams.  No matter which house I get, there will be a whole host of work involved to get it looking and feeling the way I want it.  And just when I think I’m there, something will be peeling off the wall, the paint colour will now appear a dull choice or there won’t be enough rooms anymore!

That’s how I see teams.  If you have the luxury of building a team from scratch you can select the best people for the jobs and put them together but you’ve still got to do work to develop them as a team rather than a group of individuals.  And things change too, people change, people grow, people develop new aspirations!

If you’ve moved into an already formed team, just because they are called a team doesn’t mean that’s how they are working.  Plus there’s a new feature of this team; you.  You’ve got to become part of the team, get to know them and let them get to know you.

If you’ve been lucky/unlucky enough (I know some people who thrive on this) to inherit a team that really needs a kick up the arse, then you know that this isn’t going to be a quick fix.

No matter, what situation you are in, change cannot happen by doing something once.  You need to continue to effect change.  You don’t have to do the same thing every time, but you do need to keep doing things and talking about the effect they are having.

The risk of doing something once and expecting things to change is….. it won’t happen.

Think about a time when you’ve thought “I’ll eat better”, “I’ll exercise more regularly”, “I’m going to learn the piano”, “I’ll keep in touch more often”.  Were any of these achieved through just doing it once? I doubt it. (And if it did, please tell me your secret!)

Why should team building be any different?  So start calling it team development and see it as a project, build an ongoing plan and take regular action to help your team continue to grow and develop into the best team they can be!

If you think you need help making this happen then drop me a message and let’s talk about what kind of help (or encouragement) you might need.